Conditionally allow the user to edit a column value.

Written by Steve Coile
Updated over a week ago

New to expressions and formulas? Try Expressions: The Essentials.

The Editable_If column constraint may be used to limit the user's ability to edit a column value for a row.

Editable_If is commonly used to only allow column value changes:

The Editable_If column constraint is a Yes/No expression: if the expression evaluates as TRUE, the user is allowed to edit the column value; if FALSE, the user is not allowed.

ISBLANK(LOOKUP([_THISROW].[Employee ID], "Employees", "Employee ID", "Name")) : Allow only if the Name has not been previously set for this Employee ID. See also: ISBLANK(), LOOKUP().

To set a column's Editable_If column constraint, go to the Data >> Columns tab in the app editor and click on the edit icon next to the desired column: 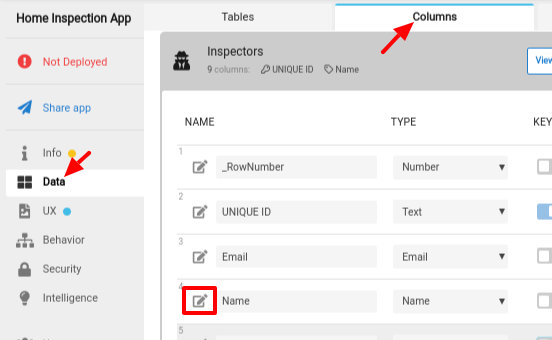 Scroll down to locate (and, if necessary, expand) the Update Behavior section, which contains the Editable? setting.

Clicking the flask icon to the right will replace the ON/OFF switch with an expression box.

The Editable_If column constraint only affects the user's access to the column value, such as when the user interacts with a form view containing the column. The constraint is also checked before allowing access to Quick Edit columns, such as in detail and table views.

Editable_If does not affect the application of app formulas and initial values, the performance of actions, or any other app behaviors.

Editable_If is consulted only if all of the following are true:

Editable_If can only be used to reduce access; it cannot be used to expand access beyond that allowed by the underlying slice or table.